A voyage to the "Land of Cities” 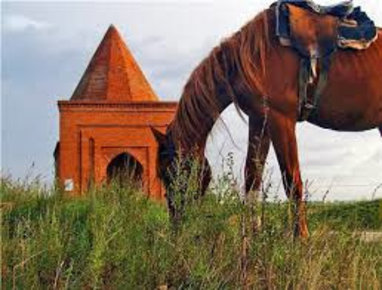 The "Land of Cities" is a name given to an area in the south of Chelyabinsk Region where mysterious civilization existed 4 thousand years ago and which left behind 20 small "Fort-Cities" and many kurgans - burial sites (mounds).

Geografically the "Land of Cities" spreads in the area between Ural and Tobol rivers. It measures 400 kilometers north-to-south and about 150 kilometers east-to-west.

Alas, time is ruthless, the “Land of Cities" is hidden now to human eye under layers of later epochs. Only at dawn and sundown from a bird’s-eye-view one can see the outlines of the ancient cities’ fortification walls as old as 4 thousand years protruding from the ground….

- Aerial excursion to the "Land of Cities"

Better known as "Tamerlan's tower", it's a remarkable historical site, to say the least. It was built as long ago as the XIV century A.D. and is a well-preserved example of early muslim memorial architecture. This is the only landmark of this kind in the Chelyabinsk region.

The fortress was built in 1835 in purpose to defend Russian and Bashkir settlements from raids of nomadic tribes. It was named in honour of the heir to the throne (and later the Russian tsar), Alexander II, after his visit of the cossack settlements of the Urals.